International Competition of Suzhou Qingtai Sino- Japanese Industrial Design Culture Village, with Suzhou Qingtai Village as the object of implementation, requires to create a design-themed Sino-Japanese design industry complex within the area of more than 500 mu (including water areas) which integrates business, tourism, culture and production, and is equipped with the permanent venue of the International Design Awards, master studios, designer apartments, as well as commercial facilities including Sino-Japanese commercial streets and characteristic hotels.

Qingtai Creation Loop: utilizing space as a means for empowering and creating scenarios

Qingtai Village, in Suzhou's Xiangcheng district, is close to the bustling historic city yet still surrounded by wilderness. With aquatic fishery starting development since the Qing Dynasty, the fishing village has gradually developed into an industrial village surrounded by natural wetlands through agricultural cooperation and industrial transformation. The quiet water town and industrial production have created a mixed but simple sense of place in the conflict - the factories and villages interlaced, the space scattered, and the life and production scenes intertwined. 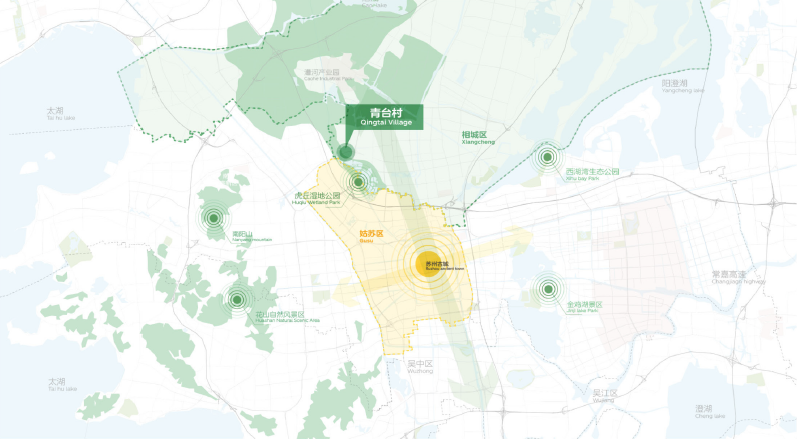 
line+ and MLA+ teamed up to propose the concept of “creation loop” in the design scheme, that is, to integrate industry and space through a closed loop. The idea of “loop” is our immediate decision when faced with the complex design requirements, and it is also our consistent philosophy. 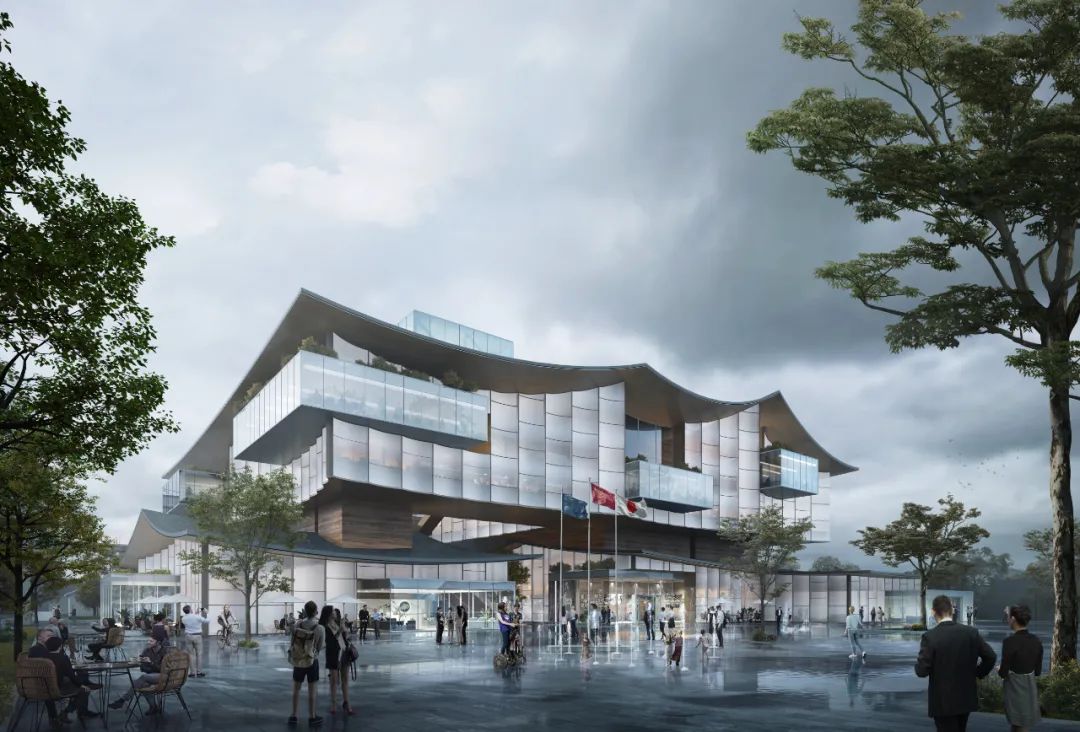 The “Creation Loop” is organized with three major loops: an efficient and intensive “function loop”, a clear and accessible “traffic loop”, and an “industrial loop” integrating production and sales, and it is implemented on the basis of four enabling strategies namely local architectural textures, expressive water landscapes, group living scenes and diverse experience landscape. 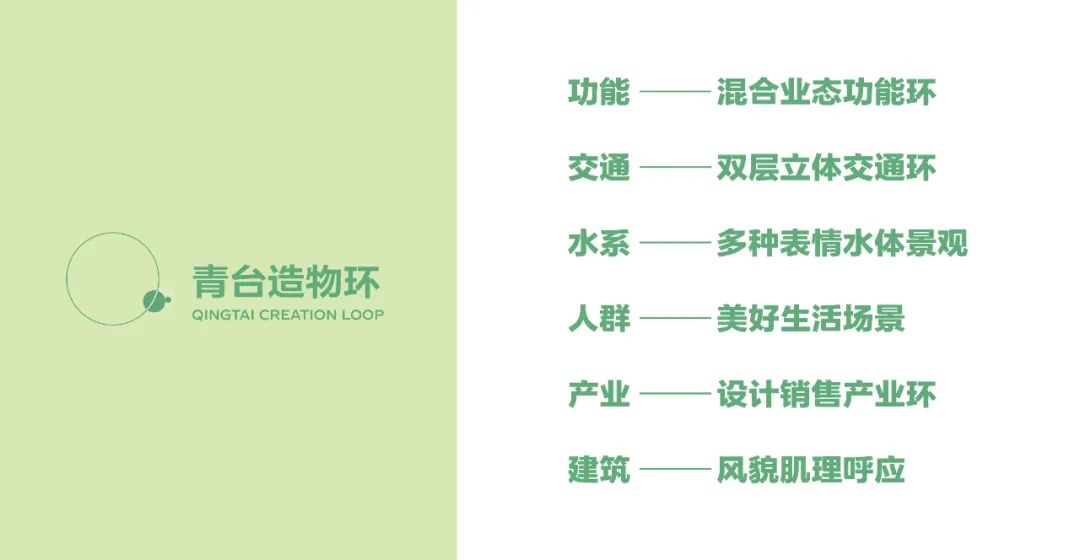 In the existing architectural texture, the industrial village is surrounded by water on all sides, and the large-scale factory area in the middle of the site extends to both sides along the intersection of the cross street. The traditional family factories are distributed in units and groups, forming independent factory units with 3-5 single buildings enclosed or arranged in ranks. 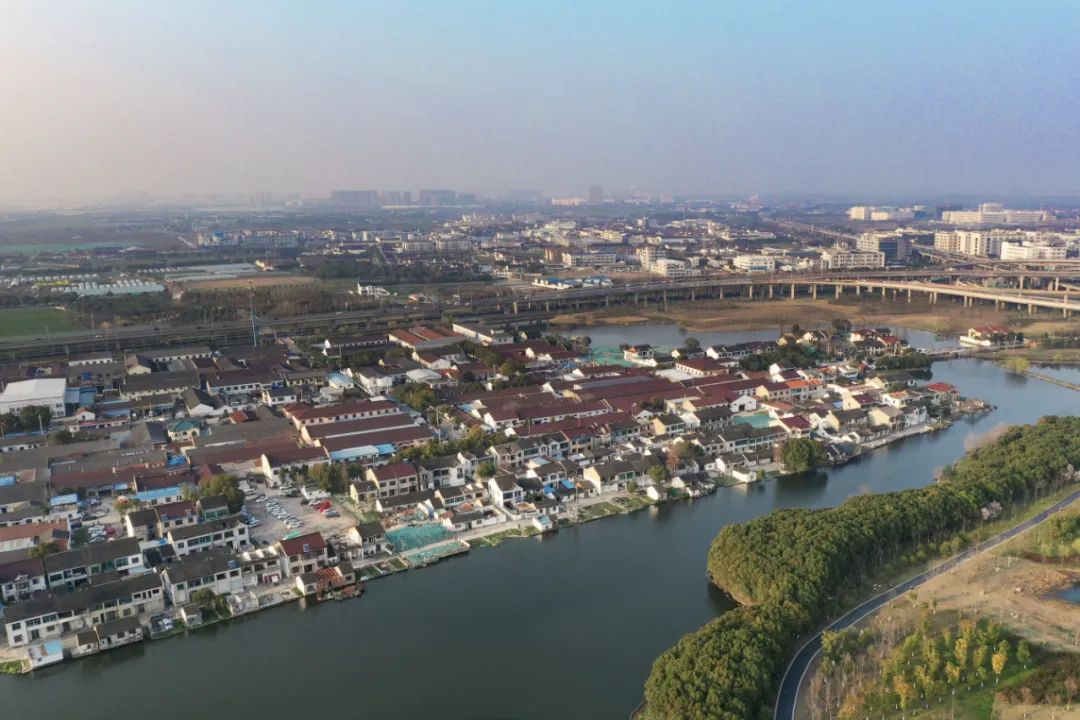 △ Current distribution of the factories on the site ©line+

We opted to appropriately keep the small-scale residential dwellings along the river in the south, the large-span structure of the industries, the spatial structure of the cross street, and the ecological landscape base in the design of the new industrial town. While updating the site texture, spatial structure, location functions and ecological landscape, we also pay attention to the preservation and continuation of the urban context and original texture.

△ Texture comparison before and after ©line+

“Water” is another important component of the site, and the spatial pattern of “streets formed by water” is a traditional feature of Jiangnan towns. Following the layout of the existing water network and road network, we choose the multi-center linear water network system that best matches the overall planning concept and with the highest practicability. In the way of decentralized water use, several water systems meet to form a central area, and then divert to form a network water space. 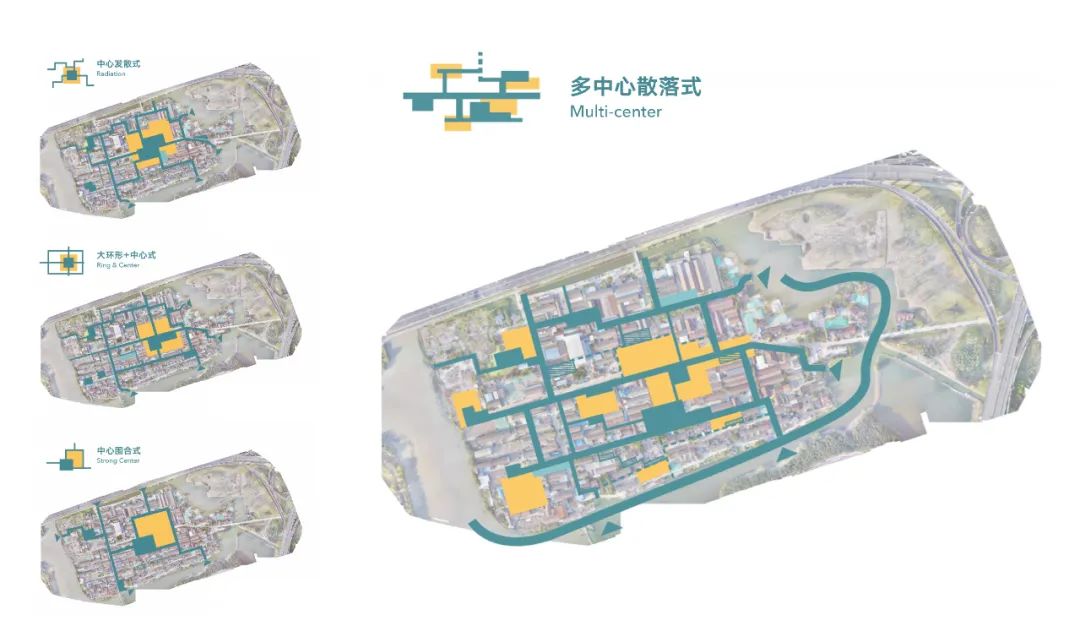 Waters of different scales create different water landscape expressions, which are scattered but interrelated in the scene. Wharfs, row boats, waterside lounge bridges and plank roads present diversified sightseeing along the water and along the park. 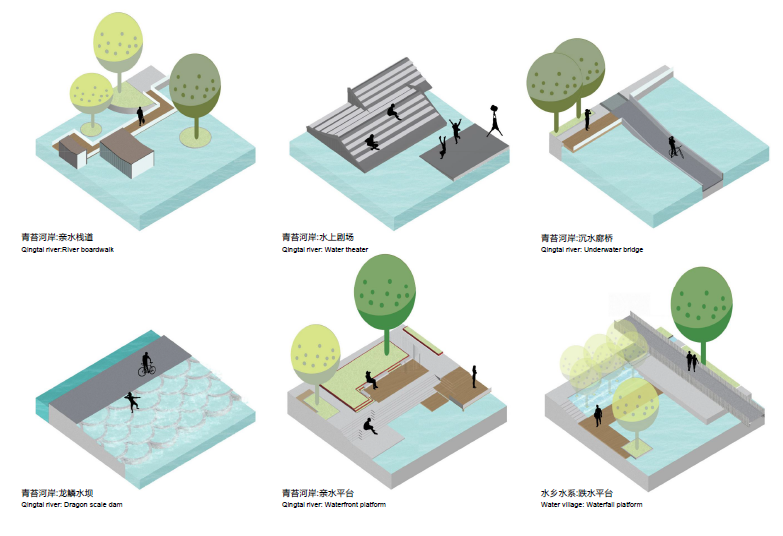 In our design, the industrial village is not a pan-entertainment amusement park, but a new industrial village featuring real industrial content, in-depth tour experience and living which is developed from the perspective of urban renewal and integrates the urban temperament of Suzhou into the street scene. In the future, Qingtai Village will be the first place to explore the industrial design industry, a developer of new Chinese and Japanese life styles, an advocate of innovative urban life, and a creator of urban inspiration that promotes design exchanges and development between China and Japan. 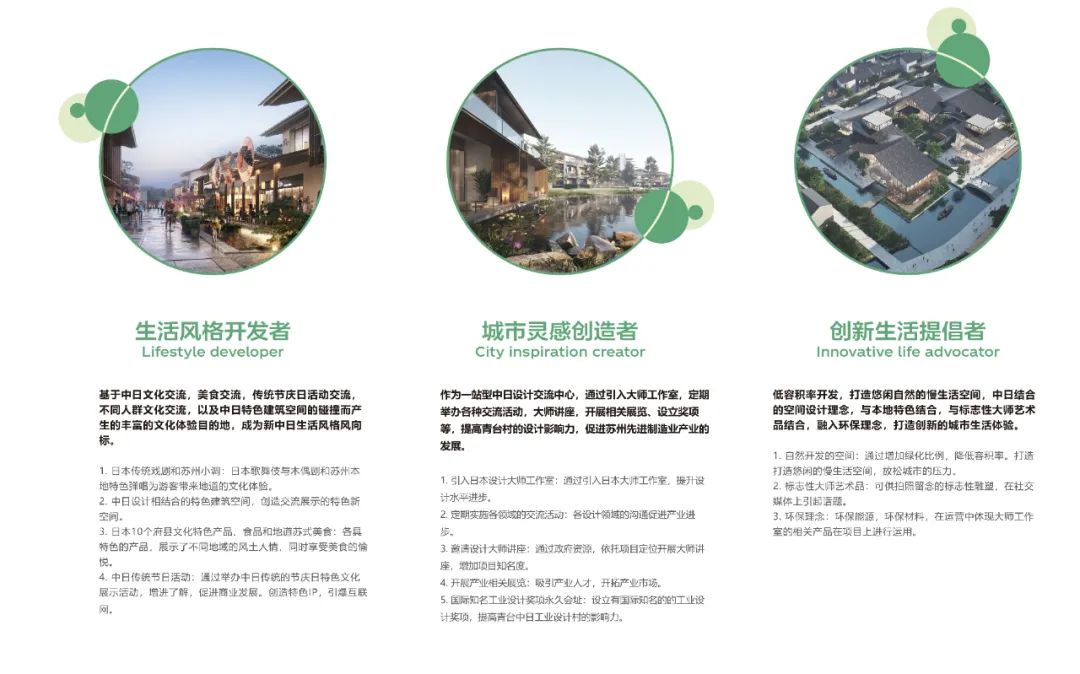 The design first breaks up the over ten properties such as commercial, office, and leisure facilities into a circular arrangement with the core purpose to eliminate the “subjective” space experience brought by homogeneous functional groups, and at the same time, the original centralized catering/commercial facilities are extended to expand the service area with an aim to create a “daily life” walking path. 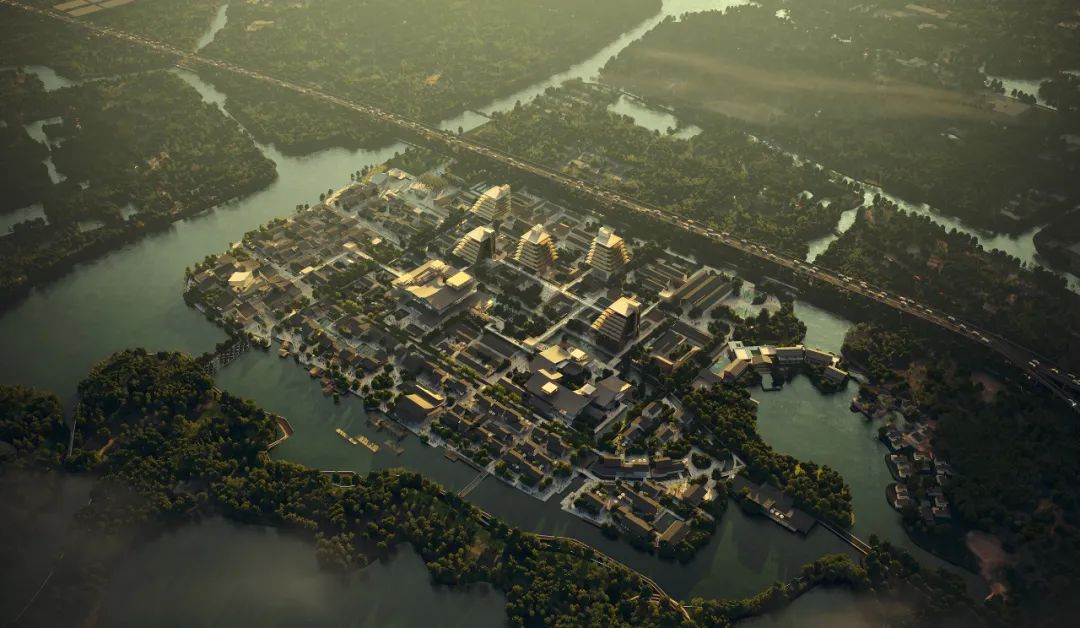 At the same time, the function loop is a circular function experience belt with radially-extending beyond the main street, rather than a basic linear pedestrian street. The initially scattered functions are naturally united to generate a new spatial connection under the structure of the "function loop." Different from the scale of conventional streets, we take the courtyard group as a new unit to widen the vertical experience thickness and continue the original site texture. With porous and open permeability, the "complex function loop" generated by the nesting of many courtyards enhances the tour experience.

As for the form of the courtyard group, we use the principle of typology to generate four unit prototypes by extracting the commonalities of appeals and then reconstructing them: the neighborhood model of shops in the front and workshops in the back, the business model of the more-dynamic downstairs and the quieter upstairs, the vertically-extending business model and the working model sharing supporting facilities along the street.

The unit grouping is largely the preservation and reconstruction of the original buildings. New functional volumes are placed vertically to achieve density variation and function intensification. The multi-layer superposition of three-dimensional spaces is used to express the transparency of history and modernity. A new spatial pattern in which old and new textures are layered and juxtaposed is formed ultimately. 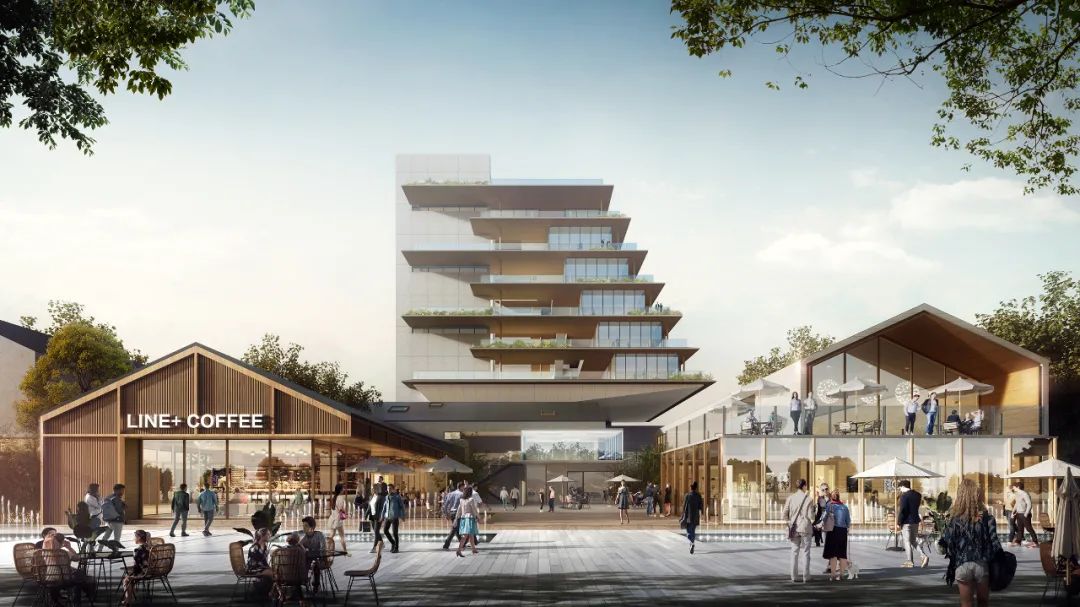 In the design of the circulation, we have considered the two groups in the community - permanent residents and tourists. The resident groups include the designers of the studios in the park, store clerks, and residents, etc. Their activities are often efficiency- and convenience-oriented, while tourists are more interested in the non-daily experience of wandering in the park. The three-dimensional traffic loop can meet the different traffic needs brought by the two different groups at the same time.

The tourist circulation is composed of commercial streets and water system. With the “activity water street” as the central axis, the inner water system and the outer commercial street form a tortuous and interesting service flow line. The two-story corridor system formed by the overall lifting of the corridor connects the main nodes in the site in series, providing quick access for the residents, and its unique roof landscape has also become a major feature of the site to attract tourists.

Ten Communities in Qingtai: the multiplicity of public buildings

“Ten Communities” are the ten nodal urban spaces in the site, which aim to break through the homogenized texture, express the characteristics of the new industrial village in a differentiated way, and realize the balance between the mixed industrial environment of China and Japan and the new-age Asian aesthetics through the translation and expression of local buildings. In addition, we have also fully considered the multiplicity of architectural forms of urban public buildings at multiple scales such as function, time, scene, and publicity - the dailiness of the public, the complexity of the functions, and the iconicity of the times. 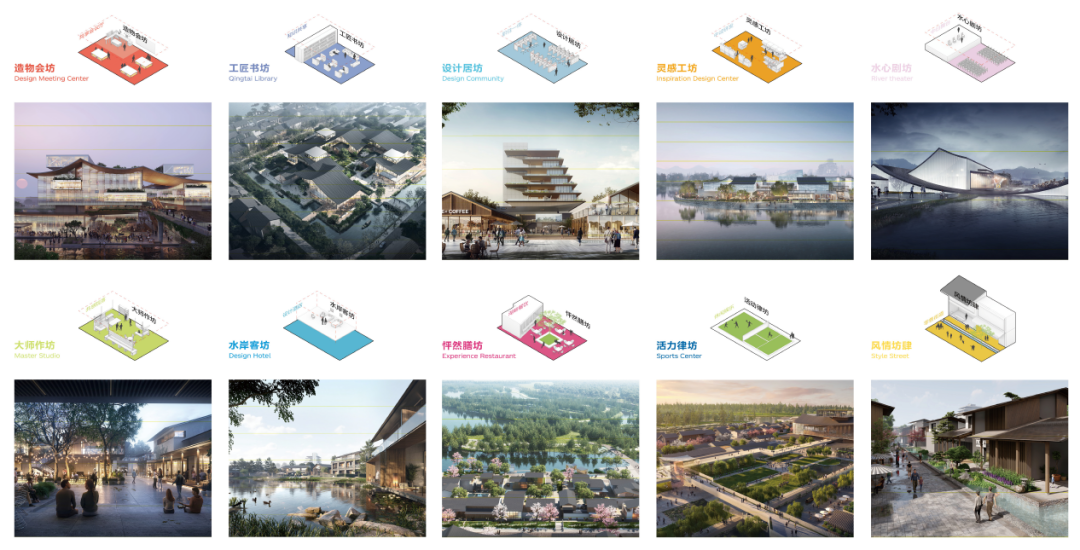 In order to change the low-frequency usage of the conference center, we implant the concept of “community” in it.

Participating functions such as exhibition halls, creative workshops, and design restaurants are set on the ground floor of the building, open to the public in the form of courtyard blocks, and provide a very dynamic public interface. The main conference hall, which is used the least frequently, is vertically superimposed on the top of the building. Covered by the sloping roof with regional characteristics, the continuous gray space can be used for public communication, thus forming an open three-dimensional community. 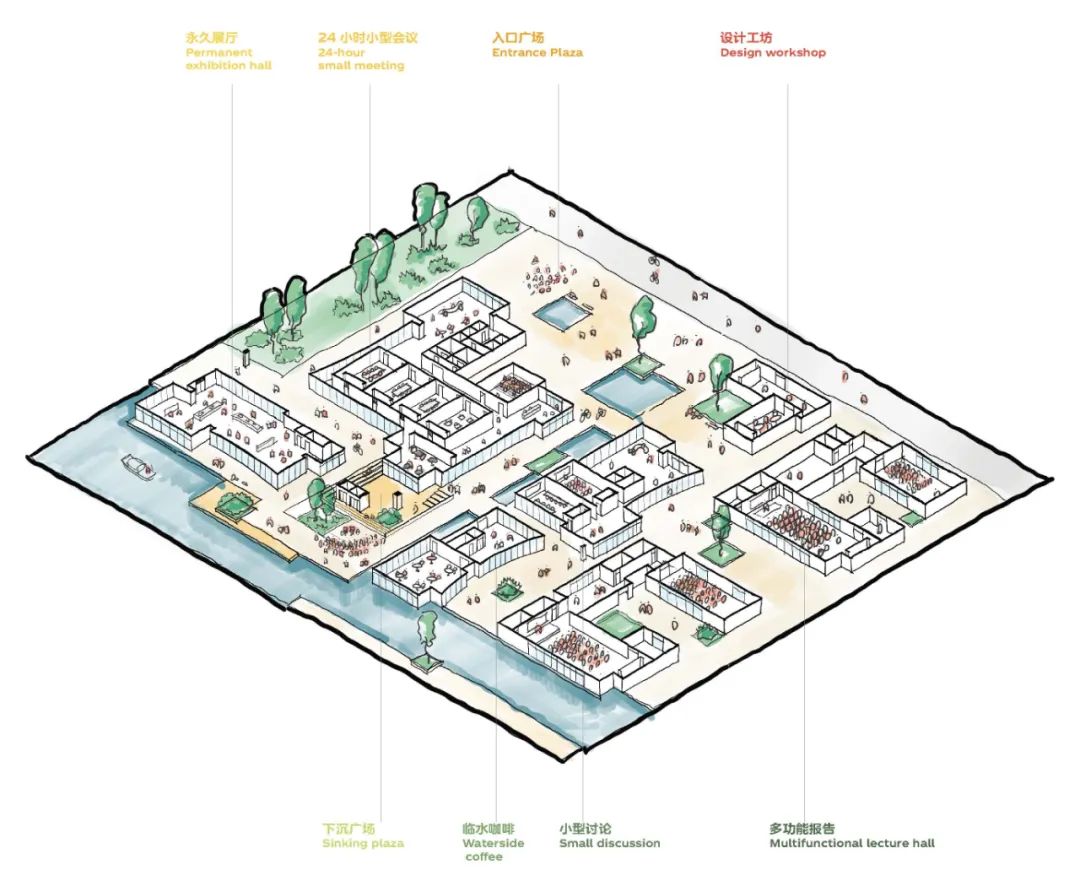 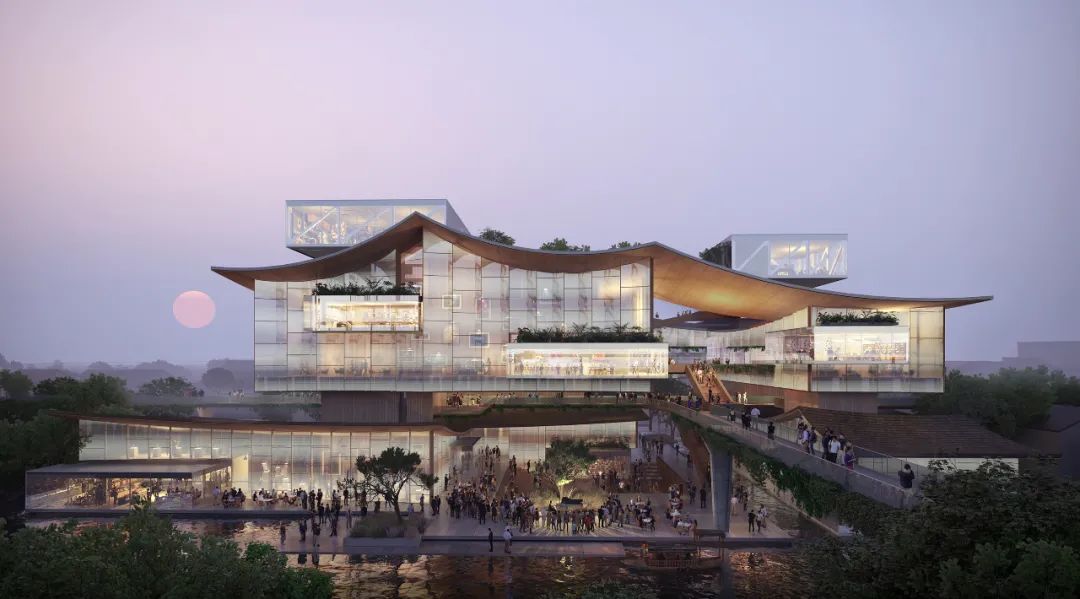 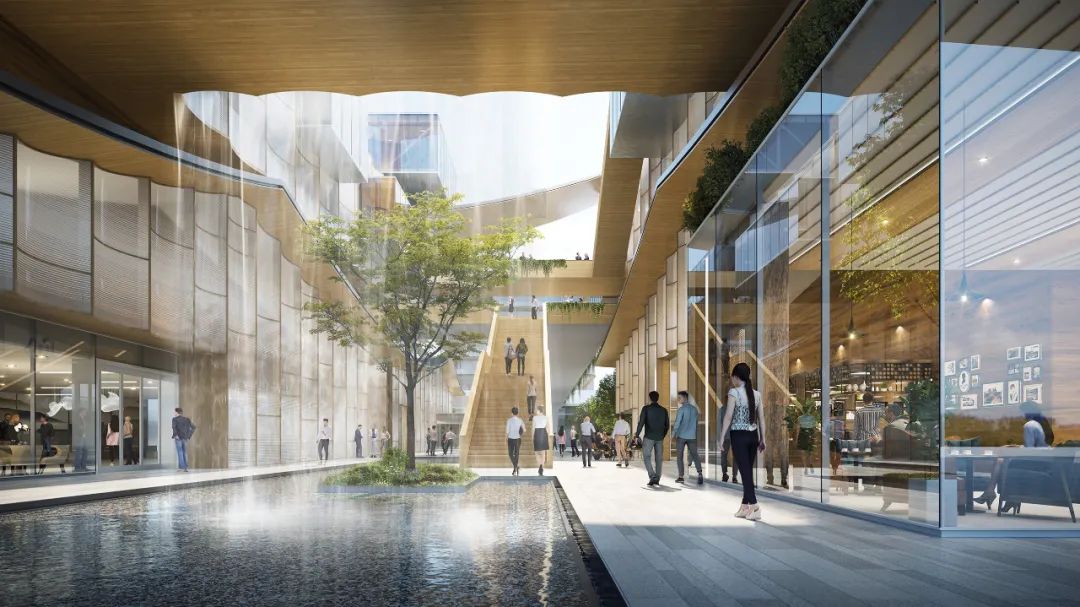 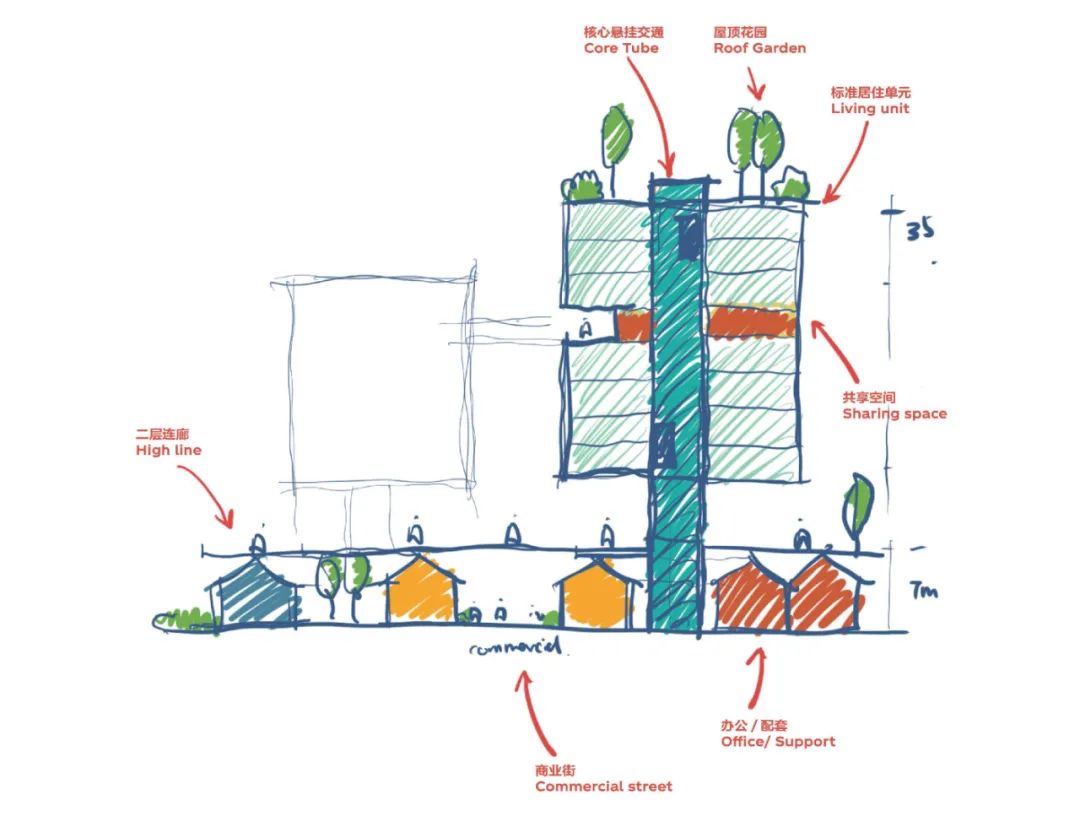 The residential group is based on the premise of reproducible unit grouping to vertically superimpose the residential increments by suspending on the space structure of the ground floor commercial street. The vertical public spaces such as shared space, community facilities, and roof gardens are placed to provide the young residents with a “three-dimensional garden” style neighbourhood communication space.

The five scattered apartments obtain the best landscape view through different orientations, and are connected in series by the corridors on the second floor to form a complete living area. 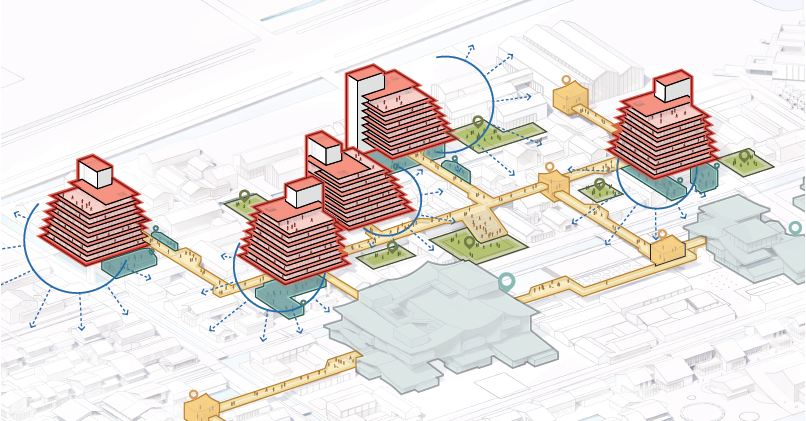 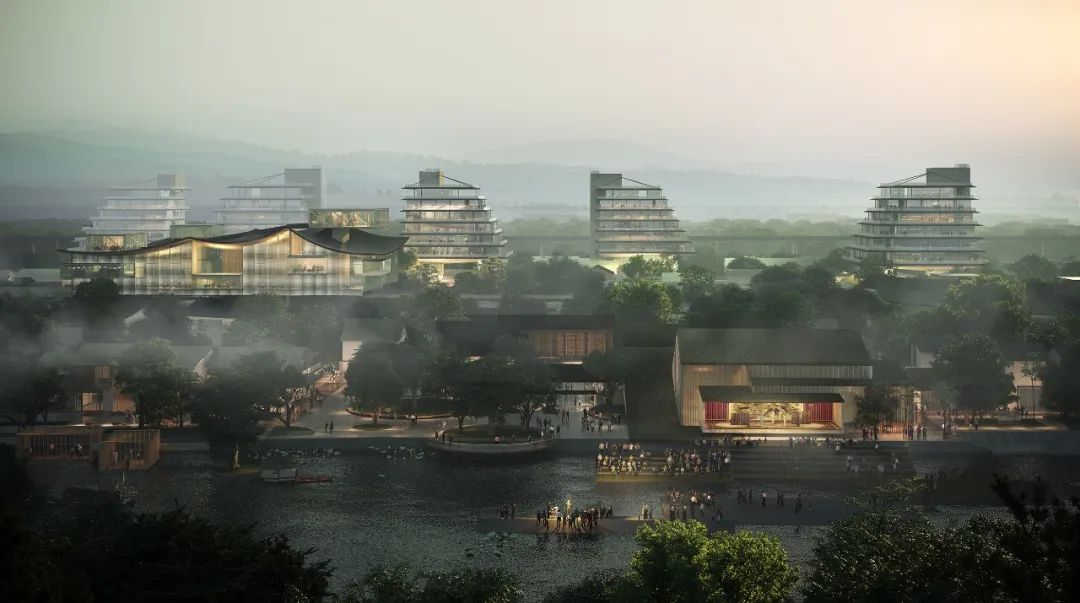 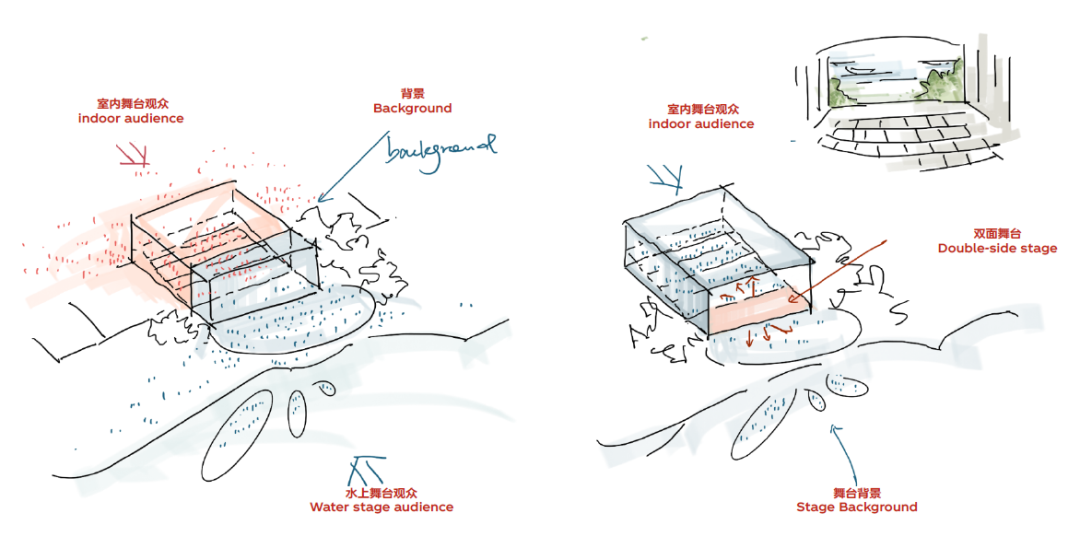 The theater is located on the south side of the water bank with a better view, and the concept of the two-way stage fully integrates the environment into the variability of the theater.

The Full-process Industrial Loop: the positive loop of design and sales

The operation of the industrial village is mainly based on three aspects: industrial design industry, cultural and creative tourism and urban living. The concept of “industrial loop” is drawn from the co-construction logic of the industrial design industry in China and Japan. With the “ten communities”, an integrated closed-loop industrial design at all stages covering from creation (inspiration community & craftsman community), production (master workshop & design residence), promotion (creation community & water heart theater), to sales (Flipped Restaurant & Folkways Shop) and experience (Waterside Guest House & Vitality Workshop) is formed, making a positive loop system integrating design and sales. In addition, in the emotional connection of different groups such as tourists, designers and residents, etc., various production spaces are used as the medium to empower the creation scene and anchor the symbiotic relationship between life and design. 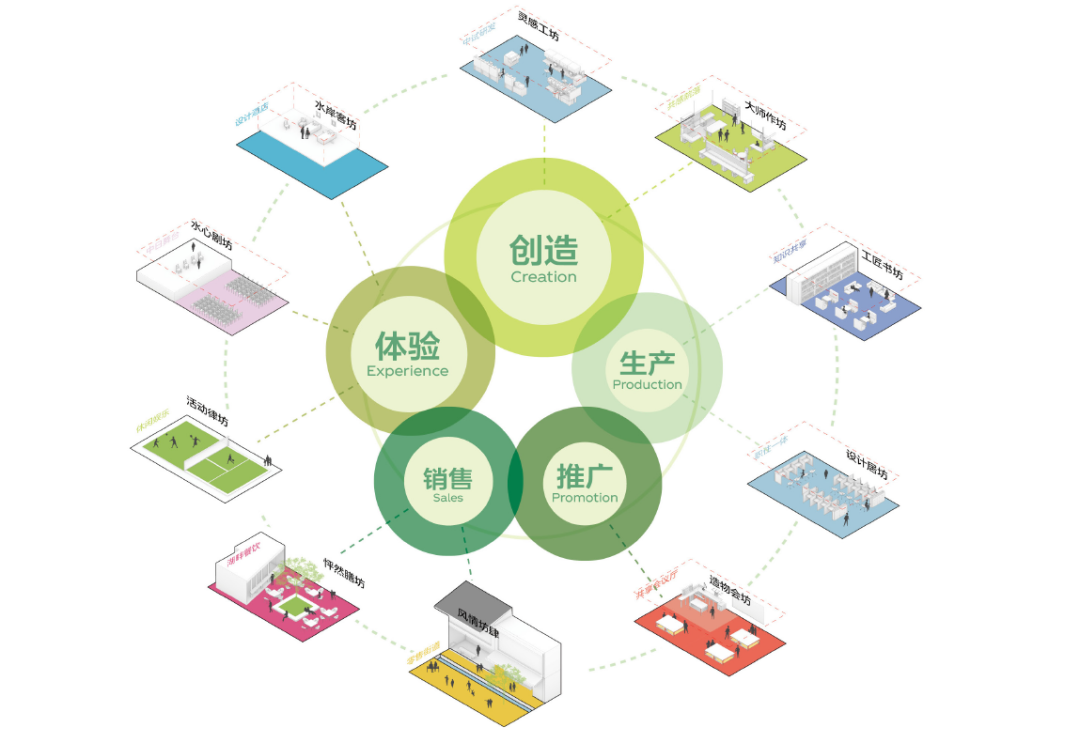 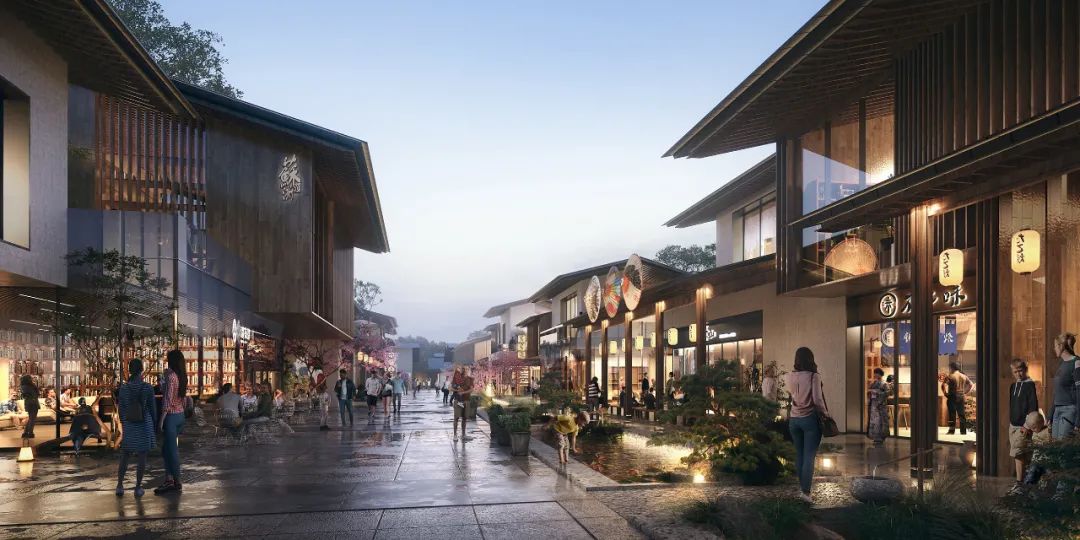 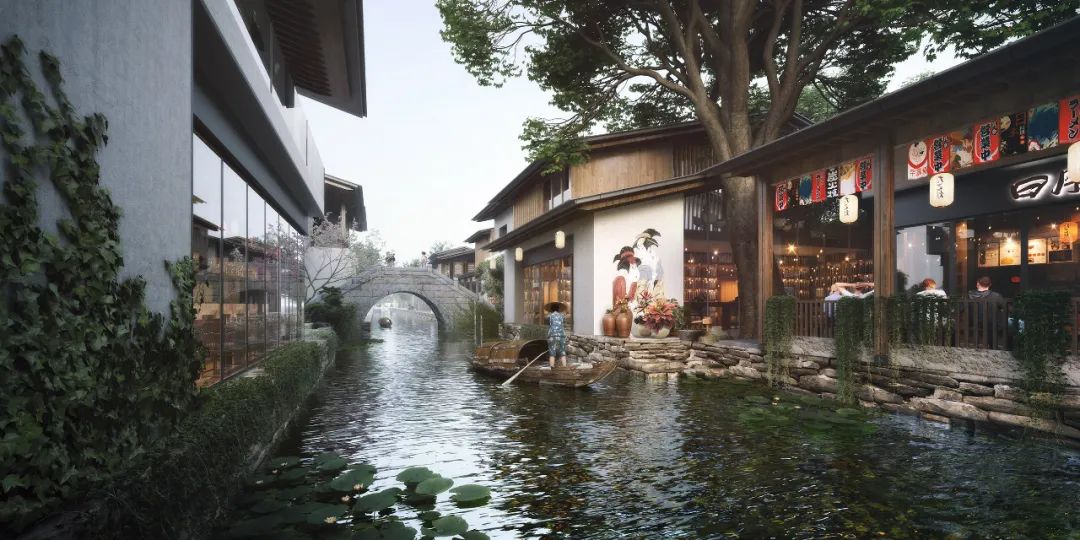 “Loop” means infinite in traditional semantics and graphic concepts. The “Creation Loop” of Qingtai aims to use an all-encompassing concept to treat mixed businesses and diverse styles, and form a clear and rational balance. 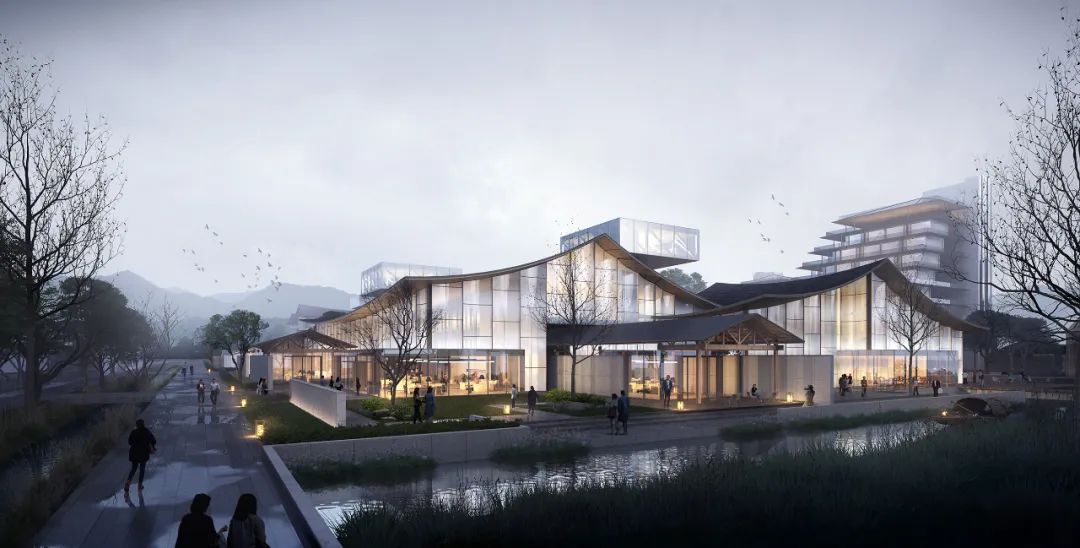 Suzhou Qingtai Sino-Japanese Industrial Design Culture Village is a new type of industrial practice exploration in a new era. It keeps pace with the times. It uses modern planning and design concepts such as three-dimensional development and compound layout to solve practical problems with comprehensive concepts and promote macroscopic renewal and development of industrial villages. At the same time, it is also true and transparent. The design takes into account the demands of space users and public needs, and provides an iconic, diverse and organic public space for the city. 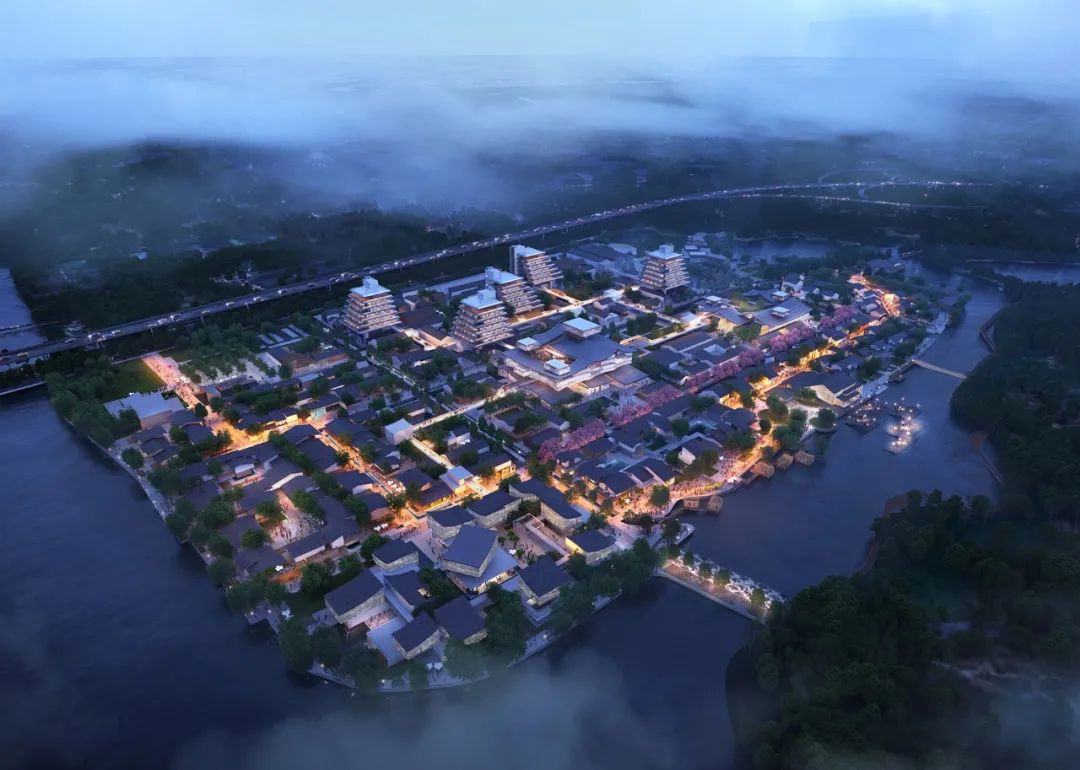